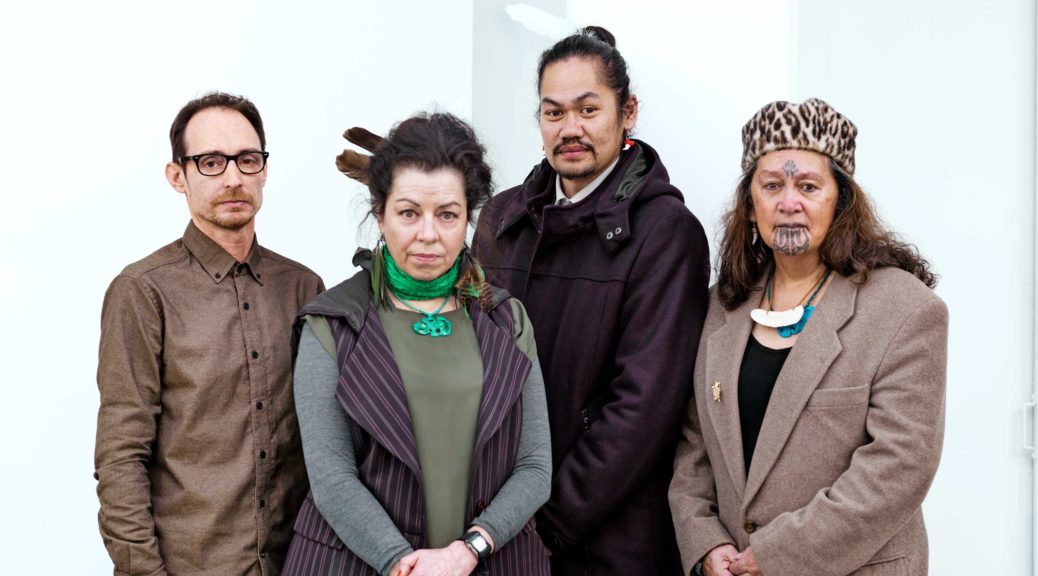 Western ideas generally hold that the virtual realm was created by recent technology. But to tangata whenua, the virtual is not a new phenomenon. ‘Māori knowledge of the virtual is embodied and can be seen in the way we are on marae through pōwhiri, mihi whakatau, karakia and mihimihi,’ said Kura Puke from the College of Creative Arts. ‘While there’s a physical “performance”, these are really about us as virtual beings who are in a human experience here in the physical world, and it’s about maintaining a balance in these interconnections. As kaitiaki, we have always talked to and engaged with the electromagnetic spectrum, including in its natural state as spacious, layered pathways of transmission utilised in Māori ceremony. Modern technologies are just tiny little tools, tapping into the energy of the spectrum which has always been there.’

Puke belongs to Te Matahiapo Indigenous Research Organisation, a collaborative group of knowledge experts, creatives and facilitators who work with aspects of mātauranga Māori utilising accessible technologies, particularly lighting and sound, for interactive, kaupapa-led creative experiences. ‘It’s applying technology as new forms of expression of ancient knowledge in new contexts,’ she said. ‘Our tohunga, the late Te Huirangi Waikerepuru, has been very influential in Waitangi Tribunal processes for iwi to have their customary rights acknowledged in regard to the electromagnetic spectrum. It has been a reaffirming and empowering process for Māori to be able to discuss aspects of their knowledge at that level, because the electromagnetic spectrum is an element of natural law and has a vast whakapapa in relation to everything else: it is a taonga.’

One of Te Matahiapo’s first projects was an indigenous art, science and education residency hosted by the Intel Center of Innovation at Rio Rancho in New Mexico, with the intention of connecting and rejuvenating relationships with local indigenous and Spanish-speaking communities, for whom Intel has been a primary employer. ‘Intel has a focus on fostering knowledge diversity through youth programmes that teach and supply sustainable technology to their communities, and encourage or mentor entry into this company at the innovation, design development and management levels,’ said Puke. The group held workshops, exhibitions and focused on bringing indigenous and scientific views together to understand and use technology in meaningful ways. ‘Working with our kaumātua and theirs, for example, we taught and built circuit boards and applied indigenous knowledge and whakapapa-based narratives to make the workings easily understood, then made them into solar powered illuminated artworks alongside ceremony.’

Another series of work that the group continues to do involves sound-carrying laser light. Stuart Foster, a spatial designer also at the College of Creative Arts, brought his creative expertise into the group. ‘We’ve done quite a few of these,’ said Puke. ‘One was with one of our Ngāti Tawhirikura marae overlooking the land to the sea, and from the cliff-face we would send a green laser light out through the night sky, across our lands into one of our historic tī kōuka, which held a solar panel connected to a speaker. From our marae we would have a microphone attached to the laser source, and we would send karakia, maioha and waiata across to that panel. The tree received the light, therefore the sounds, and transmitted those through the speaker unit. From there, we sent the sound-filled line of light across to another spot, and on to another. The calling of a female voice with a certain emotion brought about fluttering light effects into the tree canopy, whereas the male voices came through as blues and lines or angles. The effect was to make visual that idea of sending sound, frequency and intention through the spectrum heard, seen and felt by whānau on the site, and passers-by on the coastal walkway.’

Puke and Foster are also members of the Memory Waka Research Group, and were intrigued when, during an online symposium with University College London (UCL), a researcher, Dr Haidy Geismar, mentioned that they had an ethnographic collection in storage for over 30 years, including an ‘orphan’ cloak, whose provenance had been lost. ‘Stuart Foster and I had the privilege of travelling to England to engage with the cloak,’ she said. ‘At the Octagon Gallery, UCL, we displayed the cloak in a case lined with sound-carrying LED lights with two-way speakers and screens. In order to bring the cloak out from storage, a virtual pōwhiri with London-based Ngāti Ranana members was held, and our Taranaki- based elders called through their screens and microphones to welcome the cloak “into the light’’. The qualities of the light changed depending on the type of voice, its pitch, tone and timbre. We had reo maioha, karakia, kaikorero and waiata coming through, with the different light intensities, colours and sound washing the cloak. We were also exploring 3D scanning with the cloak and the next step is for UCL to send that data through to create an immersive virtual experience of the cloak over here.’

Another project used a similar principle in reverse, where a tauihu, a carved prow of a war canoe, held in Taranaki, was virtually re-created in New York in commemoration of this taonga’s journey as part of the landmark Te Maoriexhibition that toured the US in 1984. ‘We created a 3D image of the tauihu, reflected into holographic effect,’ explained Puke. ‘We had made a museum case, and it gave the 3D illusion of this tangible object that slowly moves in space and then unfurls into points of light, transforming back into form, and is activated through the sound of ceremonial karakia and waiata.’