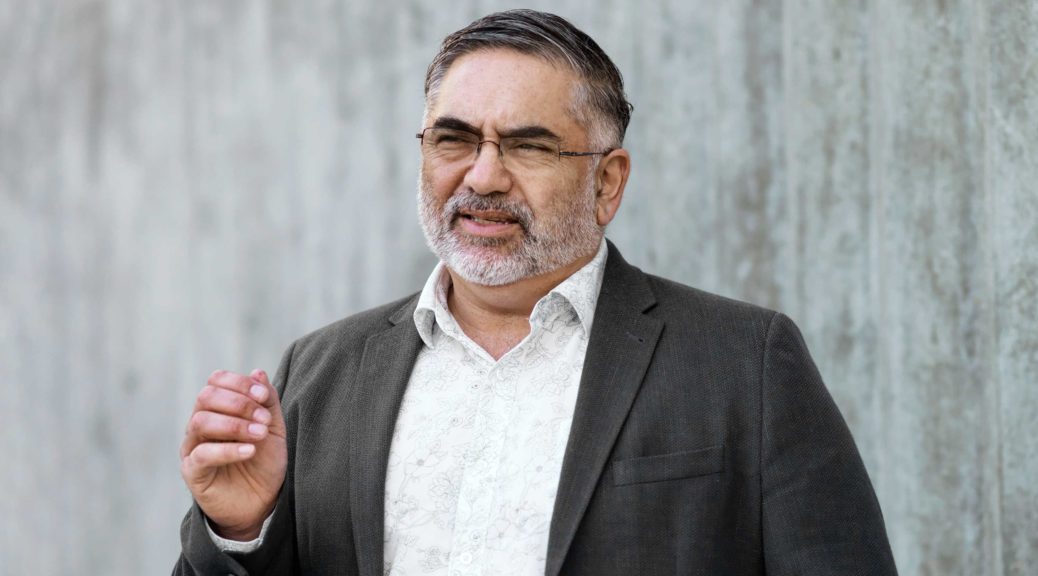 A te reo teacher for over two decades, Dr Darryn Joseph from Te Pūtahi-a-Toi, the School of Māori Knowledge, is passionate about his work. ‘I’ve always loved language teaching and learning,’ he said. ‘The challenge is that people are usually a bit concerned when they begin learning te reo Māori, so my challenge is how to help them get over their initial nerves so that they can think “I’m safe enough to learn here”. That’s a massive thing.

‘My lectures are run as workshops, which is very different. We play games and do bowls; I bring in grapes from my own vine and sometimes over Easter we’ve had a “shop” with grapes and Easter eggs, and students have to speak Māori to get them. I’ve developed a way of giving students about 15 phrases in one shot, by playing battleships with a phrasal grid, and instantly this creates a communicative situation where they try to beat the other person and don’t get hung up on the pronunciation or the activity itself. It appeals to the visual learner, it’s tactile because they’re actually doing something, and it’s aural as well because people are going, “Oh, what did you say?” So, I’ve tricked them into learning.

‘We also sing waiata, and make sure we know who wrote it, when, where, and what their iwi was, as well as learning the song. We use it to break up the lessons, because humans only have a limited attention span, and I think one of the faults of academic lecturing is that it’s quite gruelling sitting for an hour and listening. My style is that if I can’t change activities every 10 minutes then I’m doing something wrong.’ Dr Joseph now has a publishing contract to write a book of the approximately two hundred activities that he has designed.

Recently, he has developed a new course, Te Reo Tōrangapū: Political Te Reo, which combines linguistics, politics and sociology, to closely examine current Māori political issues. ‘It’s quite challenging for students because they haven’t had the traditional language learner trajectory. In it, they follow conversations between two people — one is not so political and the other is quite political — and then they learn sentences, phrases and words, all to do with Māori politics.’

Dr Joseph believes it is important for Māori academics to have an effect on their communities, as he does by fostering the next generation of te reo speakers. ‘Don’t get me wrong, I do like blue-sky research, it has its place, but I think if you are working in a Māori discipline, then it’s almost an imperative that in some way it has practical utility in the community that you’re in. I think with colonisation, and the current Māori deprivation, Māori academics have almost a moral obligation to make sure they service their community in some way.’

Dr Joseph is also a prolific te reo author, having written 23 books. Originally employed by Massey to write a series for Māori immersion education, he wrote on topics ranging from how to compose a haka or interpret songs to how to write poetry in Māori. ‘All of that was really rich fodder later on when I wanted to research and write my own creative writing books, and so that formed a really great platform,’ he said.

In more recent years, he has moved into creative te reo writing, mainly young adult fiction. He has won several literary awards, including the Huia (now Pikihuia) Short Story Award twice and the Library and Information Association of New Zealand Aotearoa award for Best Māori Writing for Children for a story called ‘Hewa’, which was based in an online fantasy game and framed around the question, ‘What world would Māori children get carried away in?’. He also wrote what he believes was the first science- fiction trilogy chapter books in Māori in 2006. Sometimes, however, inspiration is closer to home. ‘My latest book took the basic idea of a teacher who loved teaching and wanted to give a student some advice, so I didn’t have to go far to think about a teacher who loves teaching! I did it in a Māori way, which was taking all of the gods and the ancestors and giving advice through them about what to do. That came out this year and it’s done very well. One of my principles of writing for children is that I never write down, I always write up and presume that my reader is smarter than me. I try to publish one thing a year, I just like what I’m doing, and I’ve got some good relationships with publishers who are pushing me along.’